OAK BROOK, Illinois - February 26, 2018 - Looks like the Tooth Fairy tightened her money bag after an all-time high payout in 2016. According to the Original Tooth Fairy Poll, sponsored by Delta Dental, the Tooth Fairy's cash gifts dropped to an average of $4.13.

The Original Tooth Fairy Poll has typically served as a good indicator of the economy's overall direction, tracking with the movement of Standard & Poor's 500 (S&P 500) for 12 of the past 14 years. The December 2017 poll shows the Tooth Fairy hasn't quite been able to keep up with the market's hot pace—with an 11 percent cash payout decrease from 2016, while the S&P 500 saw a total return in 2017 of almost 18 percent.

Even though the average price of a tooth dropped, the Tooth Fairy still paid out a healthy $271 million for lost teeth across the nation. Those looking under their pillow for their first lost-tooth payout took far less of a hit, receiving an average $5.70 per tooth, only a minor drop from 2016 which saw a $5.72 payout. 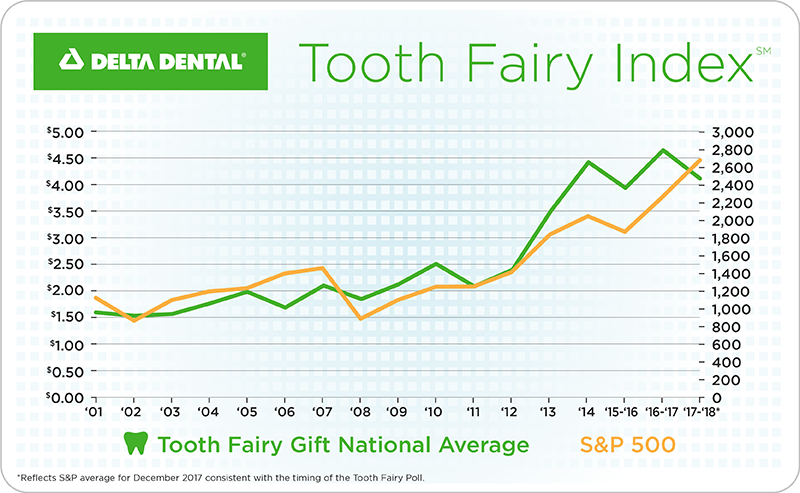 About the Survey: The Original Tooth Fairy Poll was conducted between December 13 and December 28,  among a nationally representative sample of 1,007 parents of children ages 6-12. The margin of error is +/- 3.1 percent.