OAK BROOK, Ill. — February 23, 2021 — Today, Delta Dental released new findings from its Original Tooth Fairy Poll® that show the Tooth Fairy's average cash gift reached its highest point in the 23-year history of the poll for a total of $4.70 per tooth.

"Having the Tooth Fairy visit to celebrate the loss of a tooth is a time-honored tradition, and 2020 was no exception," said Emily O’Brien, Director of Strategic Communications, Delta Dental Plans Association. "Many parents welcomed the Tooth Fairy into their homes last year as a way to teach their kids about the importance of oral health and embrace a bit of much needed light-hearted fun along the way."

Delta Dental has been analyzing the Tooth Fairy's U.S. annual giving trends since 1998. The newly disclosed value of a lost tooth has more than tripled since its inception when the value of a lost tooth was $1.30. 2020's historical giving is marked by the highest all-time average gift of $4.70 per tooth, four-cents higher than the previous peak in 2017 at $4.66. 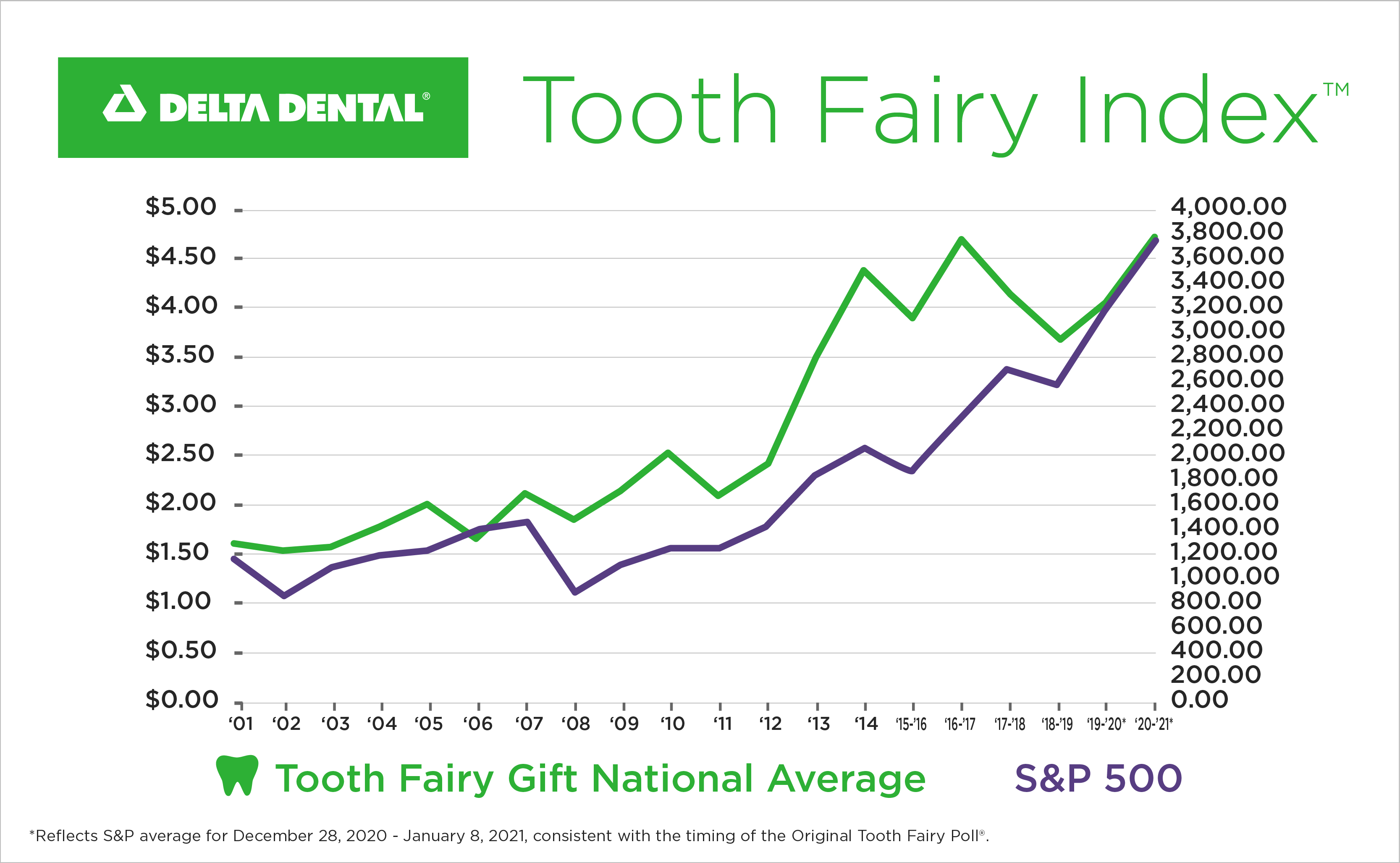 The value of lost tooth and the economy

The Original Tooth Fairy Poll has typically mirrored the economy's overall direction, tracking with the trends of Standard & Poor's 500 Index (S&P 500) for 16 of the past 19 years. Last year, a single lost tooth was valued at $4.03, and this year's survey shows upward growth to $4.70, a 17% increase. Over the same time, the S&P 500 also experienced growth, with a 19% increase, reaching its highest average since the inception of the Original Tooth Fairy survey.

Delta Dental Plans Association, based in Oak Brook, Illinois, is the not-for-profit national association of the 39 independent Delta Dental companies. Through these companies, Delta Dental is the nation's largest dental insurance provider, covering more than 80 million Americans and offering the country's largest dental network with approximately 156,000 participating dentists. In 2019, Delta Dental companies provided $76 million in direct and in-kind community outreach support to improve the oral health of adults, children, and infants in local communities across the country. Visit deltadental.com for additional information on dental plans and more.