For a second year, dentists top list of health practitioners Americans do not see as often as they would like

OAK BROOK, Illinois – March 20, 2018 – Americans are still not seeing their dentist as much as they would like. For a second year, dentists topped the list of health practitioners Americans want to see more often, according to a survey from Delta Dental. According to the survey, 42 percent of Americans don’t see a dentist as often as they would like, beating out their primary care doctor (29 percent), dermatologist (23 percent) and the ophthalmologist (17 percent).

Perhaps this desire to see the dentist more is because 85 percent of Americans believe that oral health is very or extremely important to their overall health. And while they recognize the importance, only a quarter (25 percent) of Americans are extremely satisfied with the health of their mouth, teeth and gums and another 49 percent are somewhat satisfied. Only 15 percent rated their current oral health as excellent. 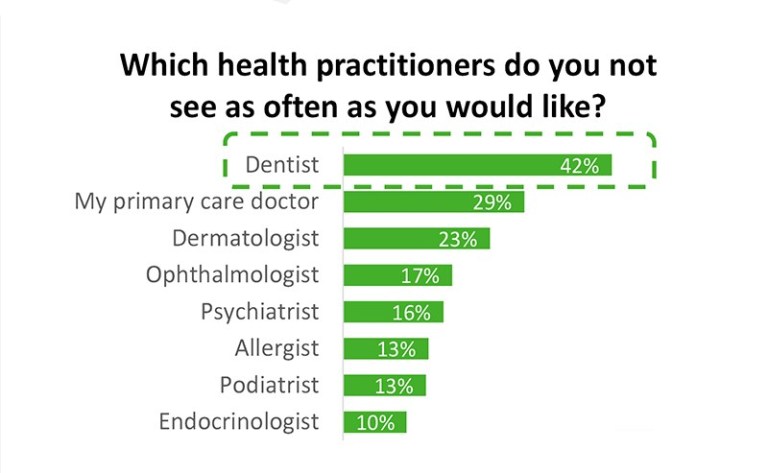 “Recognizing the importance of seeing a dentist is a good start,” said Bill Kohn, DDS, Delta Dental Plans Association’s chair of its Dental Science Committee. “Why not take that next step and make an appointment for a checkup.”

Some other dental visit stats:

About the Survey: The Adult’s Oral Health & Well-Being Survey was conducted between December 13th and December 28th, 2017 among 1,008 nationally representative Americans ages 18+, with a margin of error of +/- 3.1 percent.